The President, Nana Addo Dankwa Akufo-Addo, on Monday, 27th July, 2020, commissioned the Yapei Water Supply Project, in fulfilment of a campaign pledge he made to the people of Yapei in the run-up to the 2016 elections. 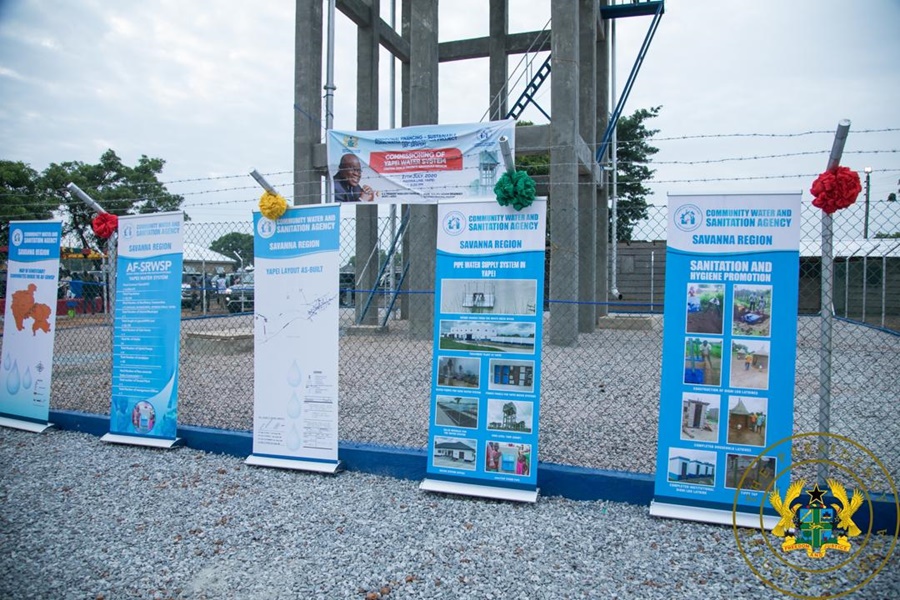 It will be recalled that on Friday, 2nd September, 2016, as part of his tour of the Northern Region, ahead of the conduct of the 2016 elections, then-candidate Akufo-Addo paid a courtesy call on the paramount chief of Yapei, Yapeiwura Soale Alhassan, who lamented about the deprivation in Yapei of basic social amenities, including potable water.

The Yapeiwura spoke at a time when his fellow Gonja, His Excellency John Dramani Mahama, was the President of the Republic and told then-candidate Akufo-Addo that “though John Mahama comes from here and we are surrounded by water, we are thirsty. There is no drinking water at all”.

In his response at the time, candidate Akufo-Addo assured the Yapeiwura that, if by God’s grace and the generosity of the Ghanaian people, he became President, he would do his best to rectify this problem.

“Nearly four years on, I am happy to tell the Yapeiwura, Soale Alhassan, and the good people of Yapei, that Akufo-Addo has fulfilled his promise to provide Yapei with water. I am here this afternoon to commission the Yapei Water Supply System, under the Sustainable Rural Water and Sanitation Project (SRWSP).” 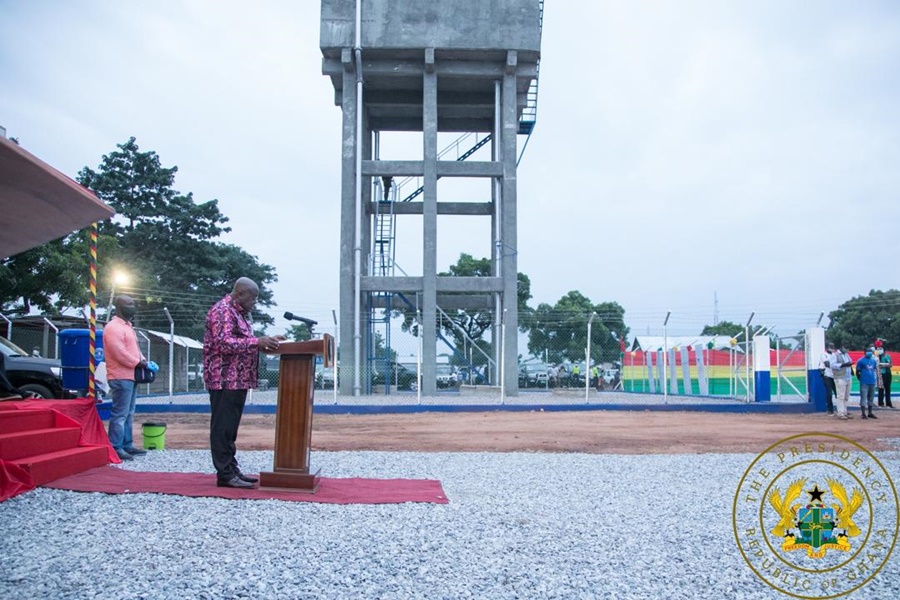 The Sustainable Rural Water and Sanitation Project, initiated in 2017, has been financed with a credit facility from the World Bank, at a total cost of US$47.5 million.

In his remarks, President Akufo-Addo told the residents of Yapei that one way to help improve the longevity of the treatment plant is for all of them, collectively, to protect their water bodies by stopping activities such as galamsey, sand winning and farming along river banks, all of which lead to their pollution.

“This would help guarantee improved water supply, in terms of quality, quantity and reliability, to the people of Yapei and surrounding communities. Water-borne diseases, such as guinea worm, cholera and dysentery, would also be eliminated,” he added. 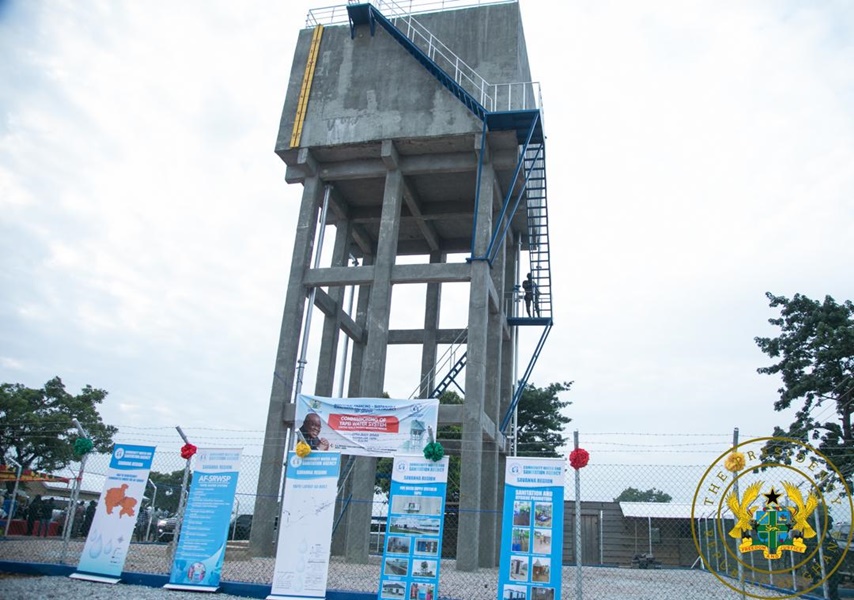 The President was equally hopeful that the Yapei water supply system would go a long way to enhance the country’s collective efforts at protecting it from the COVID-19 pandemic, and was hopeful that “the availability of potable water in this area, investors will take advantage of Government’s Flagship Programmes such as One- District, One-Factory to establish small and medium scale factories to create employment opportunities for the youth of this community, and stimulate the growth and development of the local economy.”

He encouraged inhabitants of Yapei, with requisite skills in water systems management, to take advantage of the employment opportunities created by the provision of these water systems.

Government, President Akufo-Addo added, “will continue to provide additional resources to ensure that many other communities in the Savannah and other regions also benefit from these life-changing projects. Together, let us all protect and help maintain the water infrastructure, which has come at such a significant expense to the taxpayer.”

President Akufo-Addo assured that government would not relent in its efforts to increase access to “Water For All”, a 2016 manifesto commitment of the NPP, which remains a key priority.

“We have secured funding for two other rural-based water supply projects, namely, the Rural Communities and Small Towns Water Supply Project (RCSTWSP), otherwise known as the Aqua Africa Water Project, which will benefit one hundred and fifty (150) communities in the Ashanti, Eastern, Greater Accra, Oti and Volta Regions, and the Phase III of the Water Supply Scheme for Central Tongu, Adaklu Anyigbe, Agotime-Ziope Districts and the Ho Municipality,” he said.

The President continued, “Further, government, through the Ministry of Sanitation and Water Resources, has awarded contracts for the construction of 645 mechanised borehole systems nationwide”. 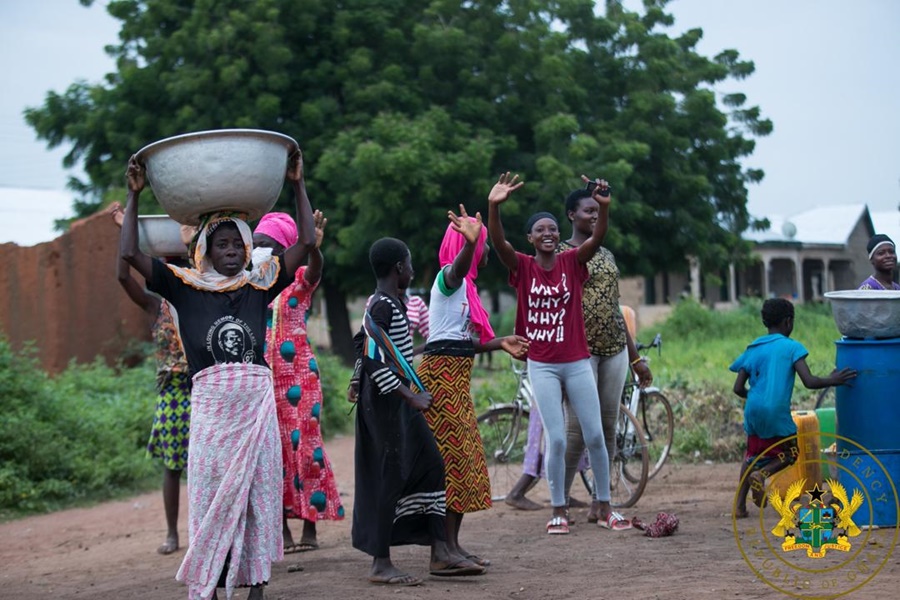 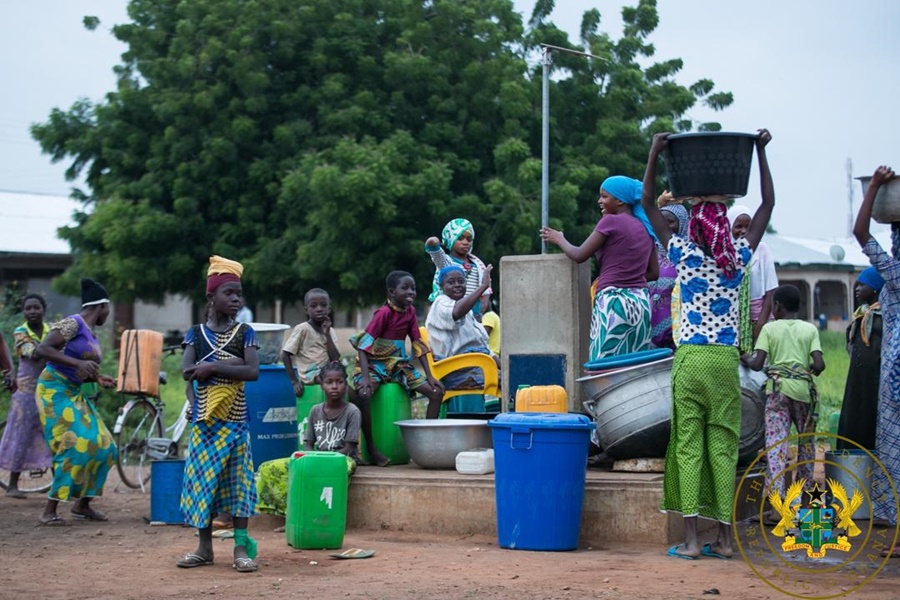